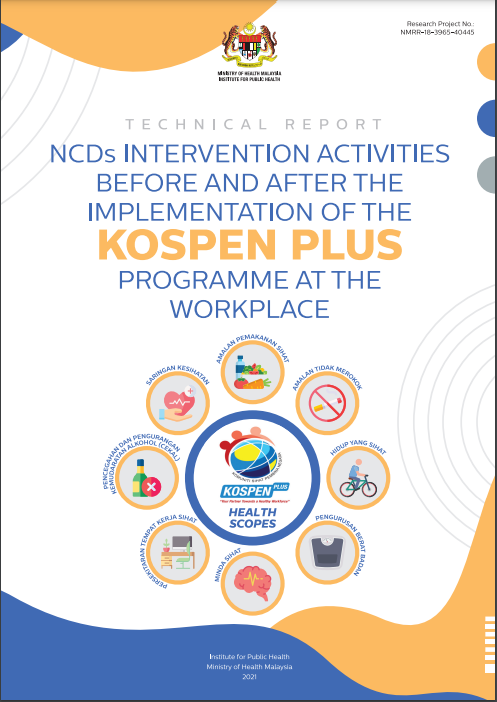 Non-communicable diseases (NCDs) continue to be an important public health problem worldwide, and the burden of NCDs not only affects high-income nations, as approximately 80% of premature NCD deaths occur in low and middle-income countries. In Malaysia, the prevalence of NCDs and NCDs risk factors have risen substantially in the last two decades. In view of the increasing trend of NCDs in Malaysia, the Ministry of Health, Malaysia (MOH) has taken a big step by embarking on a nationwide community-based intervention programme, namely Komuniti Sihat Pembina Negara (KOSPEN) in 2013. Through KOSPEN, a group of volunteers were trained to become health agents of change, or health enablers that introduce and facilitate healthy living practices amongst their respective community members. Overall, the KOSPEN programme was well accepted by implementers, volunteers and the village and housing communities.

Workers spend up to half of their waking hours at work, making the workplace an integral part of the community. Long working hours, overtime, exposure to shift work, high job demands and low job control were all shown to contribute to the development of NCDs among workers. In Malaysia, NCDs were responsible for 67% of premature deaths and over 70% of the disease burden in 2014. Therefore, the widely implemented KOSPEN programme in villages and housing communities has prompted the MOH to use the same concept of training functional units in the workplace to conduct activities and build supportive environments to prevent and reduce the occurrence of NCDs as well as related risk factors. Thus, in 2016, the MOH introduced a new programme known as KOSPEN Plus (Healthy Community Builds the Nation - Plus) to reduce the occurrence of NCDs as well as related risk factors and to increase healthy behaviours of targeted workers at the workplace. This programme consists of eight (8) scopes (six compulsory, two optional) with varying relevant activities. This study aims to assess the implementation level of the KOSPEN Plus programme at workplace after 3 years of its run in MOH health facilities, other government agencies as well as private agencies in Malaysia. In addition, this study also examines the perception of the KOSPEN Plus programme before and after it was implemented in the health facilities, government and private agencies based on the eight (8) identified scopes